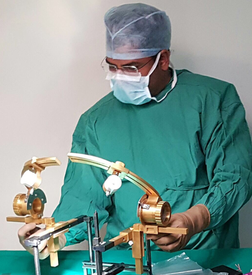 Stereotaxy is the technology which guides the neurosurgeon to the depth of the brain with perfect accuracy through a small puncture in the skull. This apparatus is of immense clinical use and is an advanced scientific approach in the field of  neurosurgery. Apart from taking a biopsy specimen, stereotaxy is very important in the field of Functional Neurosurgery such as, treatment of Parkinsonism and several psychiatric disorders.  In the present scenario, the stereotactic apparatuses are being imported to India and it costs Rs. 75 Lakhs and above .

In brain surgeries, precision is everything - even a shift of a few millimetres can be the difference between a successful surgery and putting a patient in coma. One device that improves the accuracy of neurosurgery is the stereotactic head frame, which provides a 3-dimensional coordinate system to help surgeons locate the precise location of a nerve or tumour in the brain. However the device currently used is prohibitively expensive, costing between Rs 75 lakh to Rs 1 crore. A city-based doctor has designed a low-cost stereotactic frame which can be used to operate on both sides of the brain at a time, unlike conventional frames currently used in hospitals.

The stereotactic frame designed by neurosurgeon Murali Mohan, senior neurosurgeon with BRAINS Sparsh Hospitals is made of medical grade titanium, and costs one third the current price. A simplified system to be used only for biopsies would cost half this amount. Engineers Sharath Bhat and Sadashiv Bhat at Mahalasa Medical Technology, Bengaluru, developed the device.

Dr. Mohan's inspiration to design the device was the late Balasubramaniam Ramamurthi, known as the father of Indian neurosurgery. "During his last days, he said he had started stereotaxy in India but had always wanted to design an Indian frame," said Dr. Mohan. "When I told him I would try, he smiled; I was only in my second year of training then." The second impetus was to reduce cost so that a patient in a small town in Karnataka could get a brain biopsy done without having to travel to Bengaluru.

The frame which is CE marked (ie it conforms to European standards) and is pending patent, is currently being used by a couple of hospitals in Bengaluru and Hyderabad for biopsies and deep brain simulations. Doctors say that the new frame can reduce surgery time and cost.

"I had worked on the stereotactic apparatus  RADARC, from 2009 to 2016.  With a lot of pride I want to announce that I have designed a stereotactic apparatus which is technologically superior and simpler than all the existing apparatuses. By designing this apparatus I was able to attain all the envisioned goals including a very novel feature which is exclusive to the RADARC (awaiting patent). RADARC allows targeting two regions of the brain simultaneously  This principle is very important for complex deep brain stimulation surgeries.

This technological milestone has been achieved  at 1/3rd the cost of exisiting apparatuses.  It is my dream to extend this technology to each and every district of India and to other nations as well.  There has been no compromise on quality and accuracy, despite significant cost advantage. The apparatus has been designed,  developed and manufactured as per the standards of European Conformity (CE certified)."